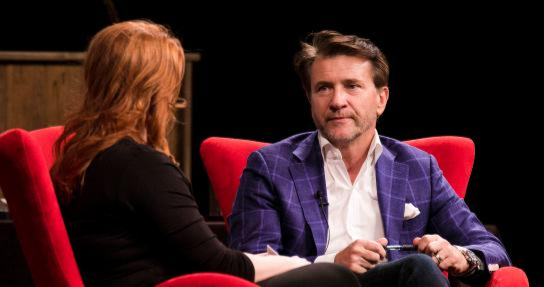 For Growing A Multimillion-Dollar Business From Rags To Riches

Today, Robert Herjavec is known as the beloved “nice judge” on ABC’s Shark Tank, but if you ask him, he thinks the descriptor “fair” is more appropriate. Whatever you call him, make no mistake: he’s one of the most shrewd and successful business people of our time. Despite humble beginnings while growing up in former Yugoslavia, Herjavec managed to leverage his endless drive and acumen into a long list of multimillion-dollar business ventures, including Herjavec Group, now a global leader in IT security services.
When someone gets officially dubbed a Shark and becomes one of the most visible faces in the business world, you might expect them to lose touch a little bit. But that’s just not the case with Robert Herjavec. At a recent conference, I had the pleasure of seeing him speak. It was clear that he wasn’t just there for a paycheck. He genuinely wanted to share his wealth of knowledge with all the attendees. Here are a few key lessons Herjavec schooled us on and how they can help your business.

Right as he took the stage, Herjavec delivered a simple but vital piece of encouragement to everyone in attendance. “I congratulate everyone for being here,” he said with a smile. “Because the key to success is you gotta show up.” Whether you’re making time for an event or just struggling to survive, “if you don’t show up, you can’t win.”

The fact is that it’s easy to get caught up in the minute-to-minute chaos of running a business. It’s just as easy to get tired out, start slipping or begin questioning why we’re trying at all. But, as Herjavec was so eager to point out, we need to bring ourselves fully to the task at hand if we hope to carve out our chunk of success. Sure, we’ll have bad days, but the more we can be present, prepared and hungry to implement our vision, the better off we’ll be.

2. NOTHING HAPPENS WITHOUT SALES. 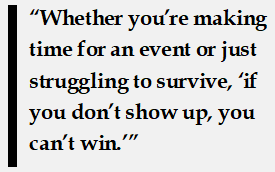 Herjavec will be the first to tell you that, starting out, he knew absolutely nothing about the sales world. By his account, he was a “geeky, technical guy” who thought that as long as he offered a great service, customers would show up. Luckily, when he was 23, his friend Ross Marsden – then a global VP of sales – gave him a piece of advice that would change his life. “You’re a great guy, and you really know your stuff,” he told Herjavec. “[But] unless you learn sales, you will never be successful.”

In response, Herjavec began to learn more about sales and marketing, until he realized, “You can have the best accounting system, the best CRM [and] the best tools, but nothing happens until you sell something.” The difference between those Fortune 500 companies dominating the market and the little guys who barely eke out a living? Sales.

“Sales is not a foreign object that controls what you do,” he said. “Sales is an extension of what you do.”

3. “EVERY DAY, SOMEBODY WAKES UP WITH THE SOLE INTENTION OF KICKING YOUR @SS.”

After hearing fellow Shark Mark Cuban say this during the first season of filming Shark Tank, Herjavec got it chiseled in granite above his desk. “One of the hardest things about becoming more successful is success,” he said. Because when you’re no longer that “hungry, young person looking to take on the world,” you get to a point where you’re content enough to let your life (and business) stagnate. Herjavec said, “The minute you want it to be like it is, don’t forget there’s somebody out there – like you were many years ago – who wants to take it away from you.”
The antidote to this attitude, according to Herjavec, is to keep selling, keep growing and keep pushing. “If one of your top three tasks every day isn’t ‘Sell something,’ you’re going to fail,” he said.

“It’s like a mantra in my mind: constant forward momentum.” If your company isn’t growing at least at the rate of the market, you’re losing ground. Customer service and excellent products are vital, but if you lose sight of the importance of sales, you’re bound to the path of mediocrity.

Of all the wisdom Robert Herjavec imparted to us, that was the most inspiring. It doesn’t matter how big or small your business is. Sell what you have, and stay hungry.